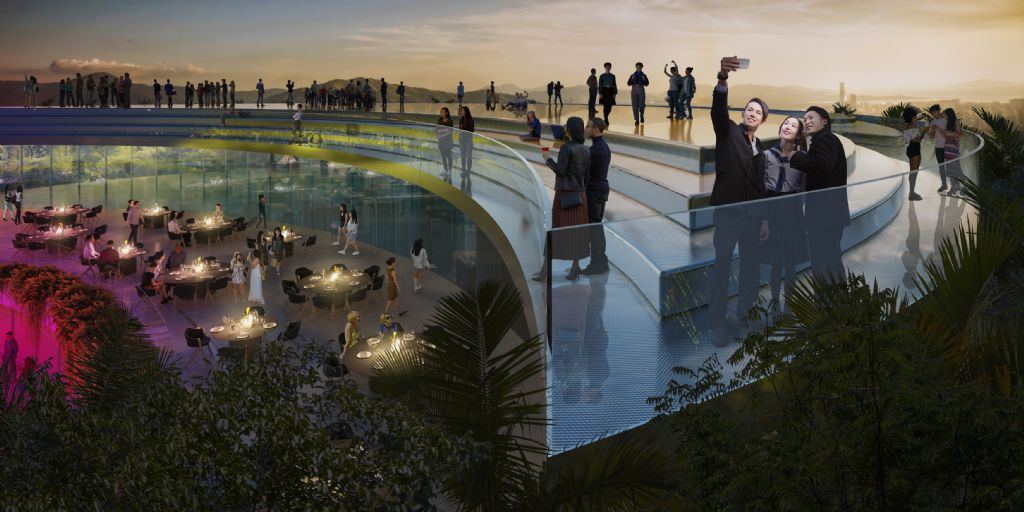 Dickson Despommier, a Columbia University professor of environmental health and microbiology, invented the phrase “vertical farming” to express the notion of producing vast amounts of food in urbanized high-rise structures, or “farmscrapers.”

This 218m tall structure designated as a farmscraper will accommodate a large-scale agricultural system with the potential to generate crops enough to feed 40,000 people each year. Apart from the farming system, it will also accommodate offices, a supermarket, and a food court in the structure. 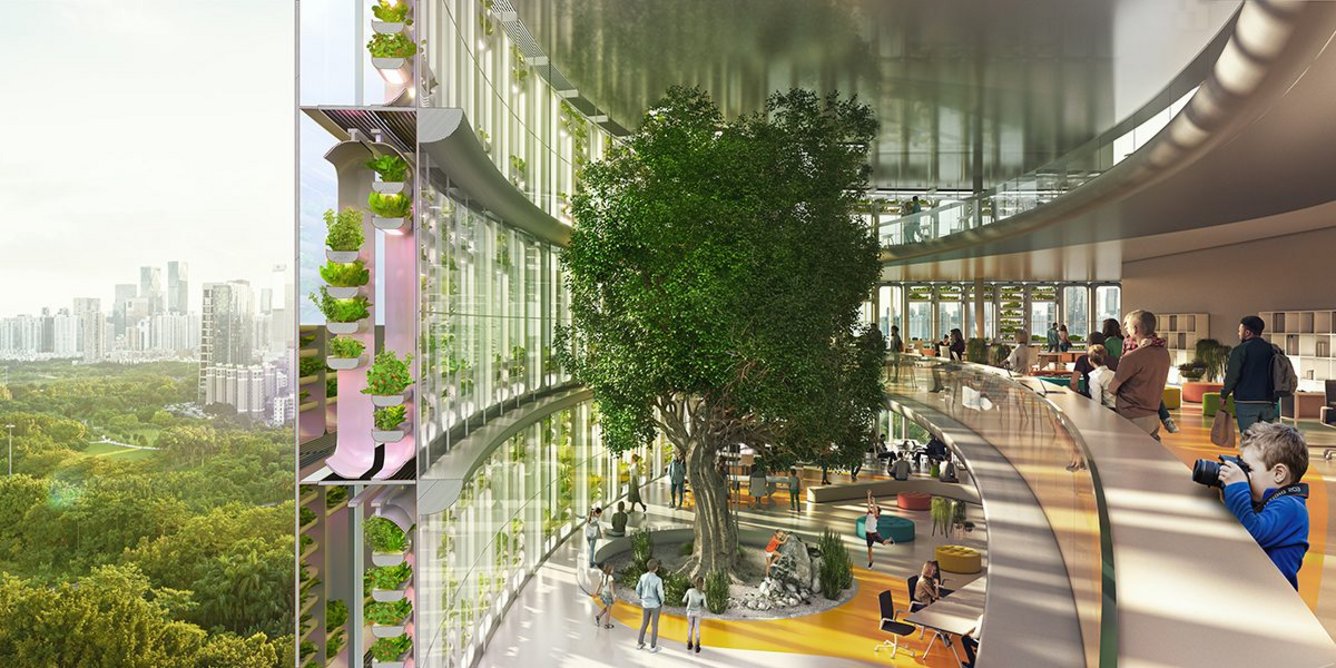 This tall skyscraper of China will use hydroponic technology to grow crops that can further be sold or consumed in that building. Instead of soil, hydroponic farming includes growing plants in hydro-based mineral fertilizer solutions. The technique results in a space-saving agricultural technology that allows crops to be organized while growing vertically.

The concept by CRA was one of the finalists in an international competition conducted by Wumart, a prominent Chinese grocery chain, for the last available parcel of land in Shenzhen’s Central Business District.

The name Jian Mu Tower is taken from the mythological emblem of the “Jian mu tree,” which connects heaven and the earth in ancient Chinese culture. Heaven is represented as round, while the earth is pictured as square, according to this Chinese tradition; qualities that are mirrored in the building’s design, which begins with a rectangular foundation and progressively transforms into a cylindrical form as it ascends.

The façade of this farmscraper has a 10,000-square-meter surface dedicated to a vertical hydroponic garden that runs the length of the building and is expected to generate 270,000 kilos of food each year. The Jian Mu Tower aims to “create a self-sustaining food supply system” in which food is grown, harvested, sold, and consumed all under one roof.

In order to develop the agricultural system embedded in the architecture, CRA collaborated with Italian agricultural innovators ZERO on the development of the whole system, resulting in a final structure that allows for the generation of green vegetables, fruits, and herbs.

The farm’s day-to-day operations, including watering and nutritional conditions, will be overseen by an AI-assisted “virtual agronomic.” A series of planted terraces on the building’s façade, meanwhile, features a variety of plants, including water lilies, ferns, and lychees, with the goal of fostering biodiversity. A series of inner gardens in the interiors are designed in double-height volumes, to encourage social contact and overall well-being among office workers.

CRA’s (Carlo Ratti Associati) main design ideology is to think, design, and make innovation in the urban area by exploring the confluence of the natural and unnatural in the built environment, frequently utilizing digital technologies as part of this multidisciplinary mission for unique architectural products.

“The vertical hydroponic farm embraces the notion of zero food miles in the most comprehensive sense,” mentioned Carlo Ratti. “Crops cultivated in the tower are sold and even eaten in the same location, which helps us conserve a great deal of energy in food distribution.”

“We worked alongside a company called ZERO, which specializes in innovative agricultural solutions,” added Carlo Ratti.

He continues, “The ultimate solution we developed is an efficient one from a management perspective and it adapts traditional robotic hydroponic farms to a vertical facade.”

The structure is steel-framed, with truss beams linking concrete floor slabs to the building’s core. 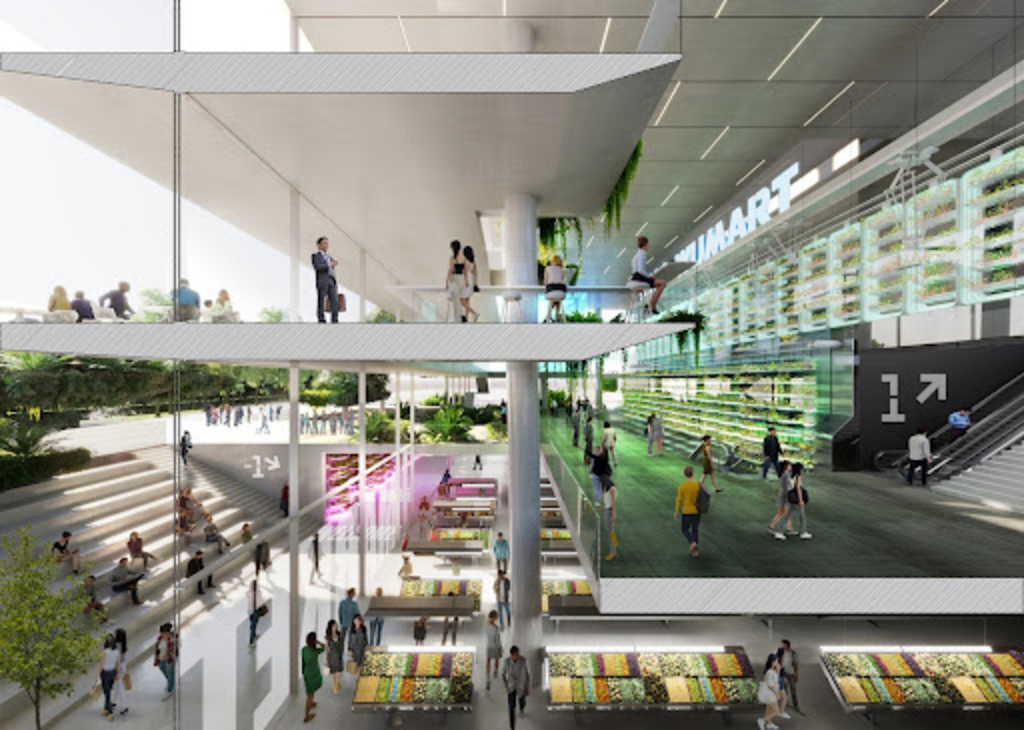 Inside the skyscraper, offices, a supermarket, and food courts will take up 90,000 square meters which are zoned and distributed vertically over 51 stories. Office areas are connected to double-height green manicured terraces that wrap around the building’s façade and showcase a range of plants. These gardens merge well with the indoor spaces and form a seamless connection between the built environment and the natural environment which allows the users to stay connected with nature.

The vegetation on the front would minimize solar heat gain on the inside, lowering the building’s air conditioning requirements. The humid environment of Shenzhen would aid in the irrigation of the vegetation.

With the help of advanced technological systems, office workers inside the buildings can customize the micro-climate of the interiors through a mobile app.

Urban farming is a concept that is already there in the market and is being practiced all around the world. But, this farmscraper in Shenzhen takes it to other heights as it plays a vital role in influencing the design of future urban areas. This building has addressed one of the current architectural challenges- the amalgamation of the natural environment into the built environment.

A common issue in skyscrapers is solar shade control, which is very well taken care of in this structure. With its combination of cutting-edge technical solutions, creative design, and agricultural principles, it has a good chance of standing out in the architectural proposals as the world’s first farmscraper.

The ultimate example of CRA’s efforts to combine natural and agricultural systems into urban buildings is Jian Mu Tower. VITAE, a building complex in Milan now under development for Convivio and centered by a 200-meter-long grapevine open to the public, share a similar mentality. The firm is working on the CapitaSpring Tower for CapitaLand in Singapore with BIG-Bjarke Ingels Group. The 280-meter-high structure will include an indoor forest that spans many floors when it opens in late 2021.

Urban agriculture is bound to increase and draw public and political attention as people become more conscious of the environmental consequences of food production and transportation, as well as the source and quality of the food that they consume. Bringing agricultural production closer together is pedagogical as well as sustainable. However, because of the tiny size and other constraints, cultivating food in a metropolis differs from conventional farming in certain ways.

Vertical farming is the practice of cultivating crops on laterally inclined surfaces. Rather than the conventional methods of producing vegetables and other crops on a single horizontal floor, as in a farm or a greenhouse, this method grows them in vertically stacked layers, which are frequently integrated into other structures such as skyscrapers, shipping containers, or converted warehouses. Vertical farming’s main objective is to maximize crop yield in a small space. 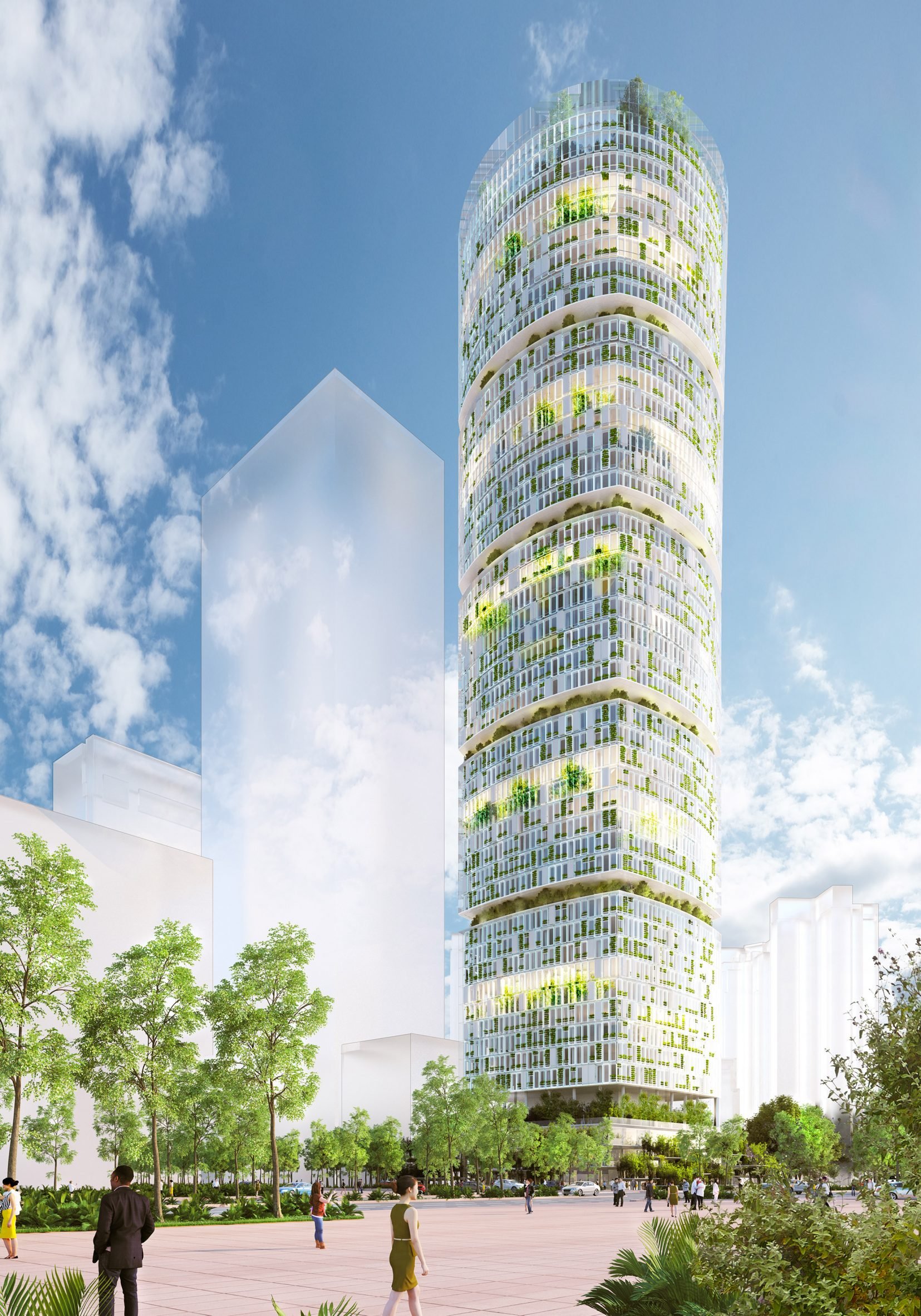 This farmscraper can be considered as an example of an eco-futuristic building with the sustainability principles incorporated to work well with technological solutions. The structure will dictate the new architectural vision of how the construction and design world can go hand in hand with agricultural practices.

This architectural design with ecological principles is a model for the future green urban areas that strive for a symbiotic relationship between humans and the environment. Architecture is a powerful tool in our society which can be proven from this architectural marvel as it bridges the gap between buildings and nature, also, forms a connection with the agricultural roots which are mostly practiced in rural areas.

The collaboration’s concept is to celebrate food as an important component of daily living while also encouraging a better, more sustainable approach. This design provides cheap, sustainable food growing and consumption that is integrated with the working environment, identifying possible savings in transportation miles, water usage, and organic waste.

How to Design a More Environmentally-Friendly Home

11 Amazing Curtain Ideas That Will Instantly Elevate Your Space

A Minimalist ‘Wood and Mountain Cabin’ By Sher Maker in Thailand

Mango Teen Store Designed by Masquespacio as a Dreamy Place

The Different Types of Timber Used for Decking Joists 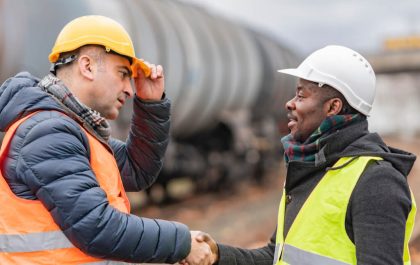 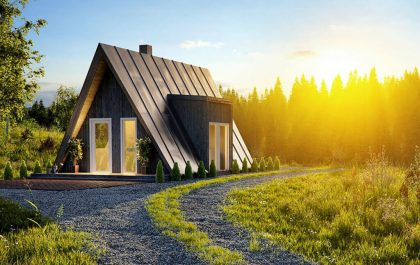