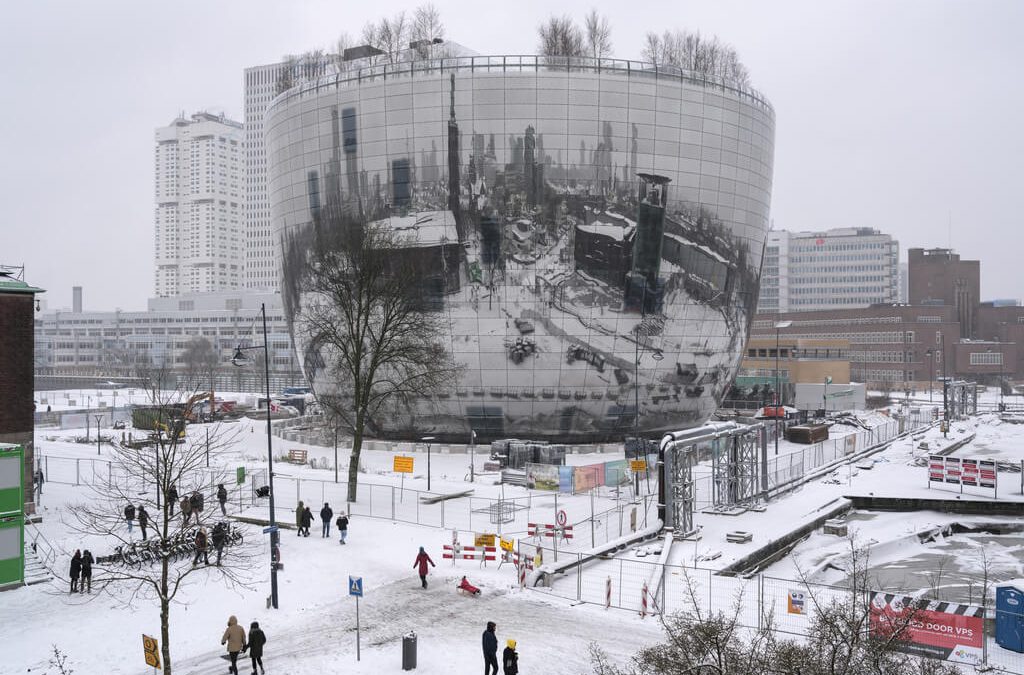 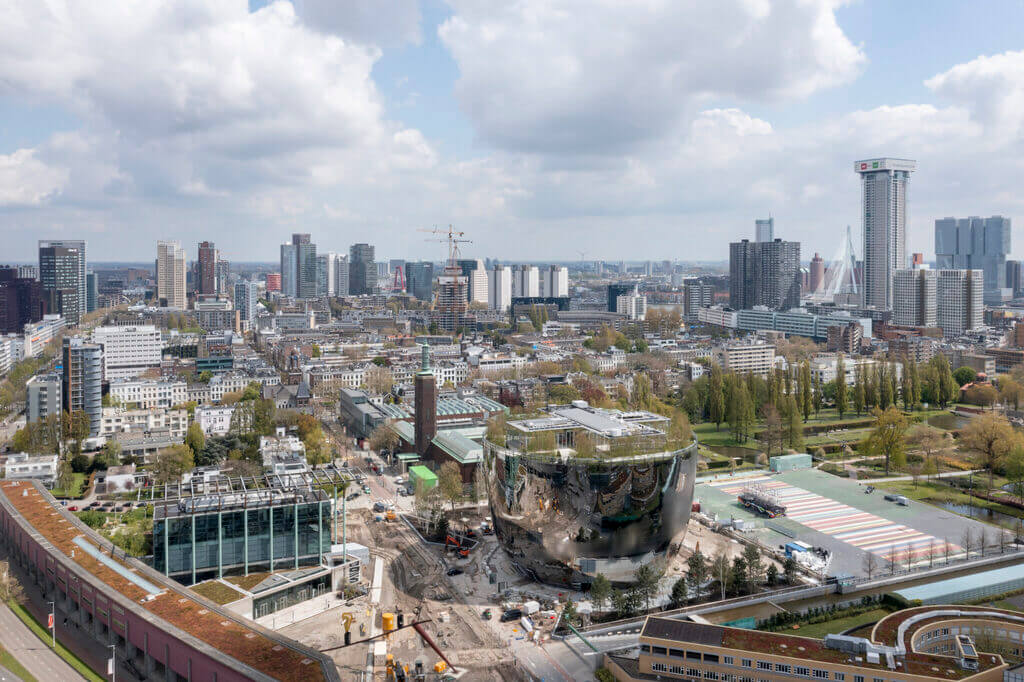 World’s First Fully Accessible Art, MVRDV’s Depot Boijmans Van Beuningen has opened doors for the public to gaze at the installations and art collections. The mirrored building, which is set in Rotterdam’s Museumpark includes exhibition rooms, a roof garden, and a café. It provides a behind-the-scenes view into the realm of museums while also making art exhibits available to the general public.

MVRDV aimed to create a structure that proved to be welcoming and accessible to the public while also serving as an entrance to the Museum Park. As a consequence, the ovoid form of the structure was born, with a diameter of 60 m at the peak and 40 m at the bottom, enabling a relatively modest footprint. 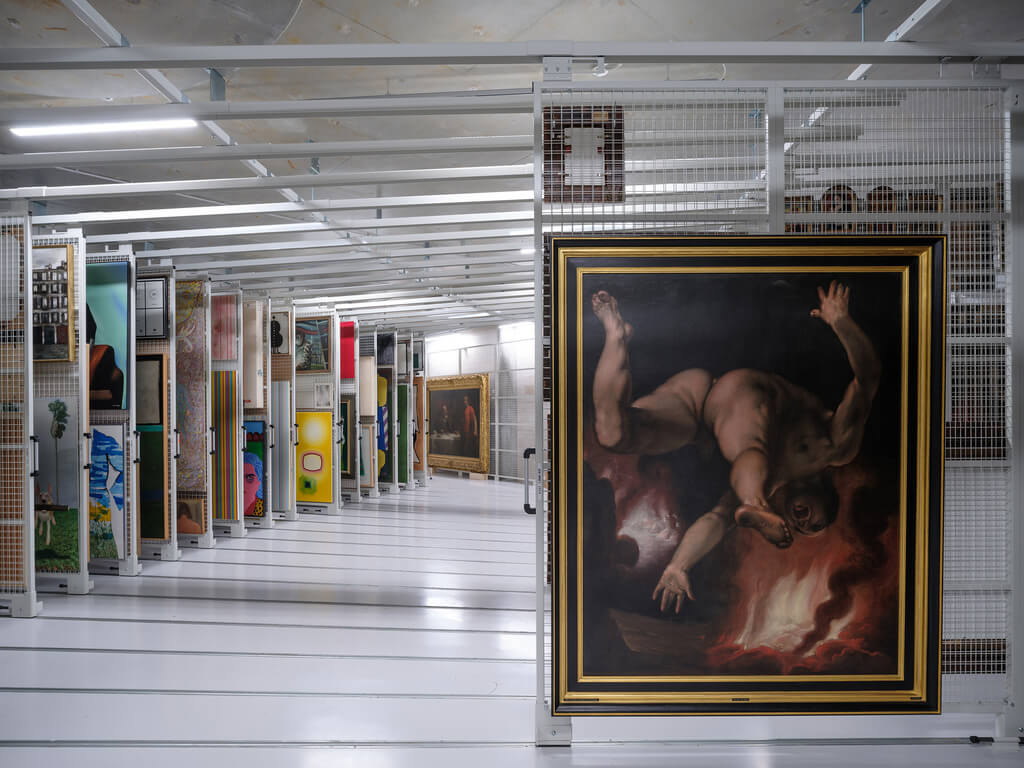 Museums, including the former design of MVRDV’s Depot Boijmans van Beuningen, were only displaying 6-10 percent of their collections. The Depot will place its complete collection on view, breaking the tradition of secrecy. Being the world’s first fully accessible art, it allows visitors to stroll among the 151,000 artworks housed in five climatic zones or dine overlooking the panoramic views of the city from the rooftop jungle and restaurant Renilde.

Metallic, plastic, organic/inorganic, black and white, and colour photographs, all have their own climatic zones that ensure the best circumstances for their materials. The famous building maintains ideal humidity and temperature levels while also being as energy-efficient as feasible. The design’s sustainability is ensured by solar panels, geothermal heat exchangers, LED lighting systems, and rainwater conservation on the rooftop, which feeds water for the roof garden and restrooms. 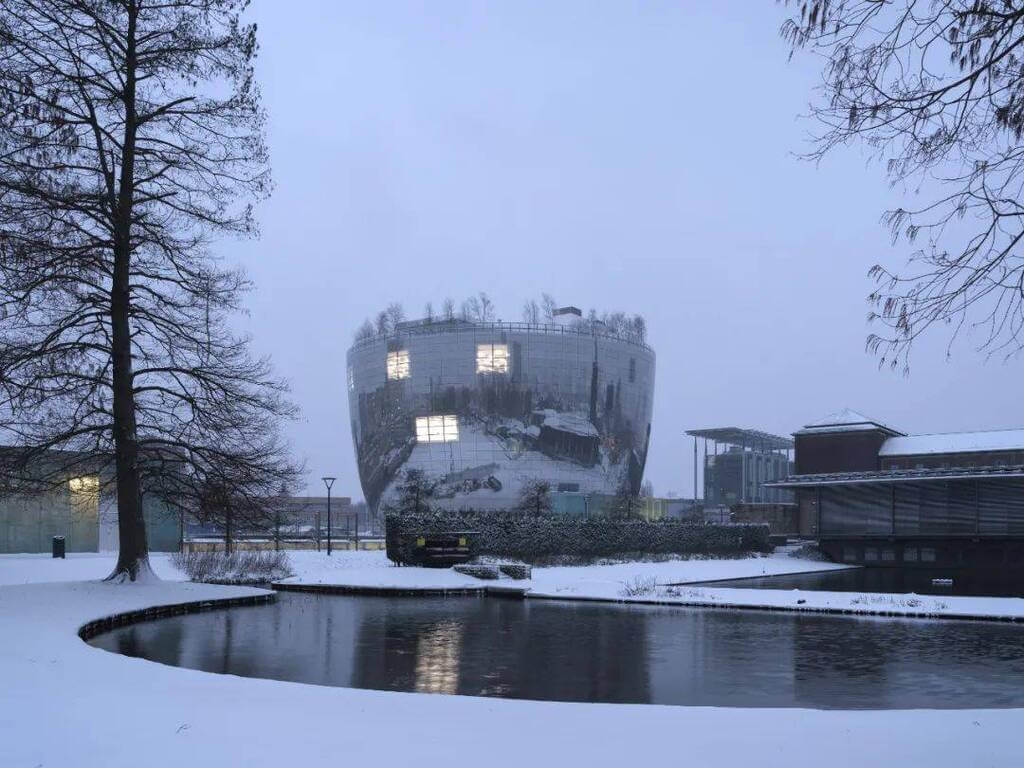 MVRDV’s Depot Boijmans van Beuningen is structured by a spherical, bowl-like shape that flows upwards with a 10 m overhang, built with a minimum footprint and designed to be as appealing as possible. The building’s facade is made up of 1,664 reflective glass panels that blend it into its neighbouring setting. During opening hours, the enormous entry doors blend into the facade and are only visible during that time. 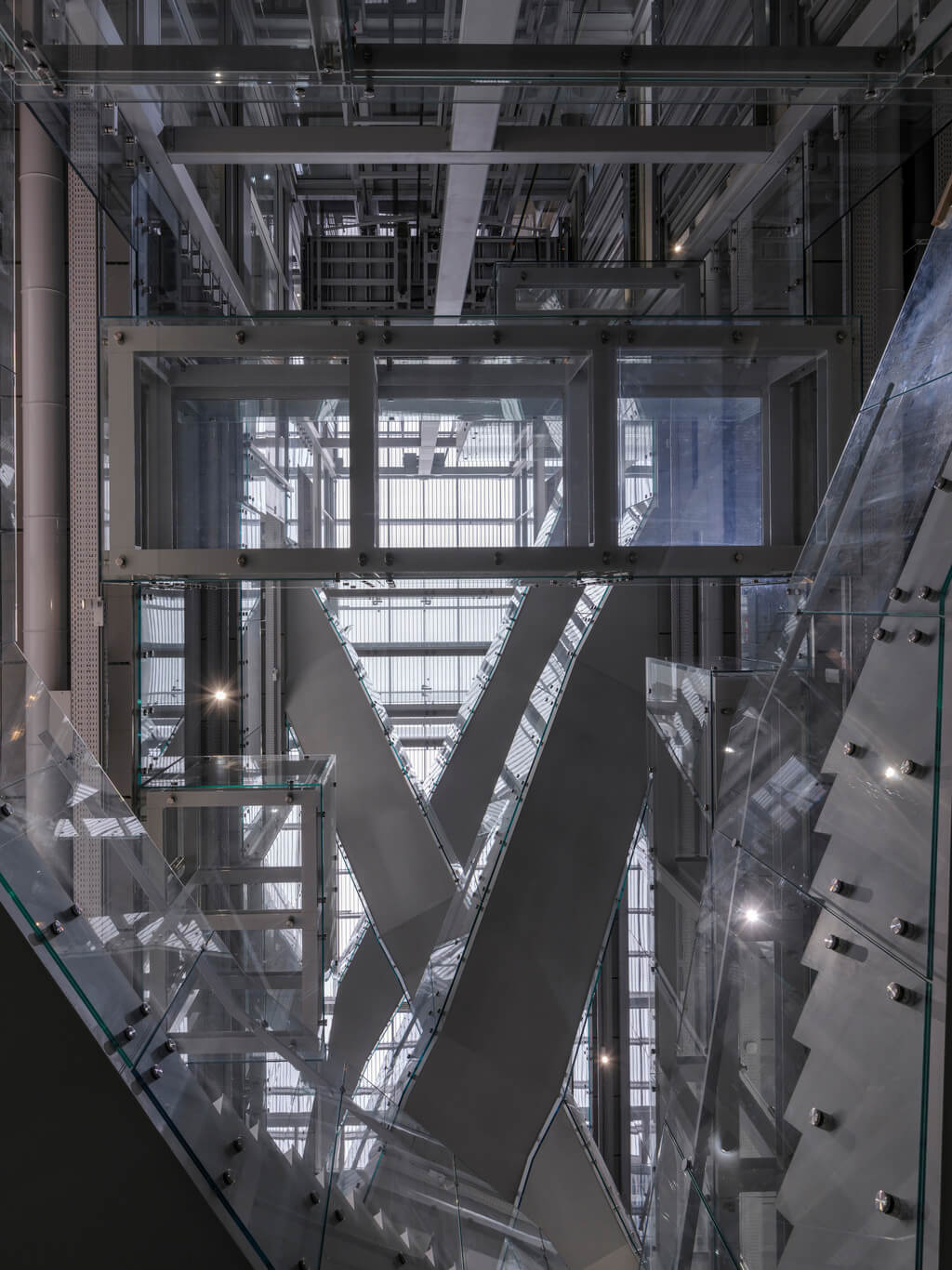 Upon entering, guests see a vast atrium with criss-cross staircases. Visitors may witness the contrast of old and modern pieces since the art is housed as per the size and temperature needs rather than art’s historic times. Across the seven stories, the building program includes restoration workshops, culinary facilities, and cinema and presentation halls in addition to the art storage facilities.

The atrium’s windows gazing into the storage areas provide the illusion of a panopticon, with views of the artwork from every angle. As soon as guests approach the structure, they are greeted with a collage of collection items displayed in thirteen giant displays.

Several artists collaborated on the interior designing: John Körmeling created the entryway, while Marieke Van Diemen designed the display cabinets. Outside, Pipilotti Rist created a lighting work that transforms the station at night. 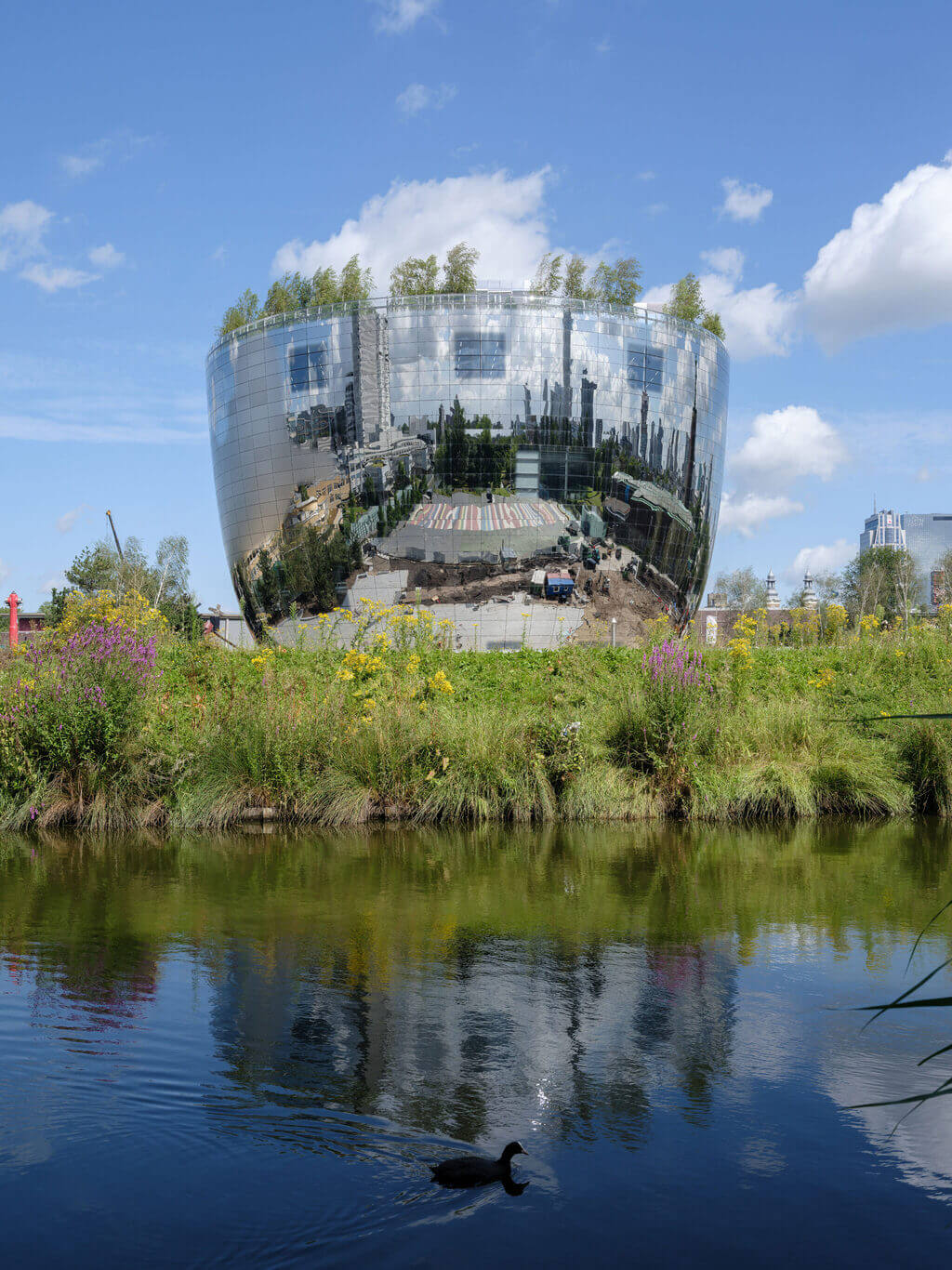 75 birch trees, grasses, and 20 pine trees make up the 35 m high roof forest, which helps to retain water, increase biodiversity, and minimize thermal discomfort in the metropolitan area. The trees for this development were grown in a nursery for three years before being transplanted to their new destination.

Their roots are intertwined, and the birches will be able to resist severe weather even at an altitude of 35 m since the windbreak and cross-shaped dining on the roof shield them from windy conditions. 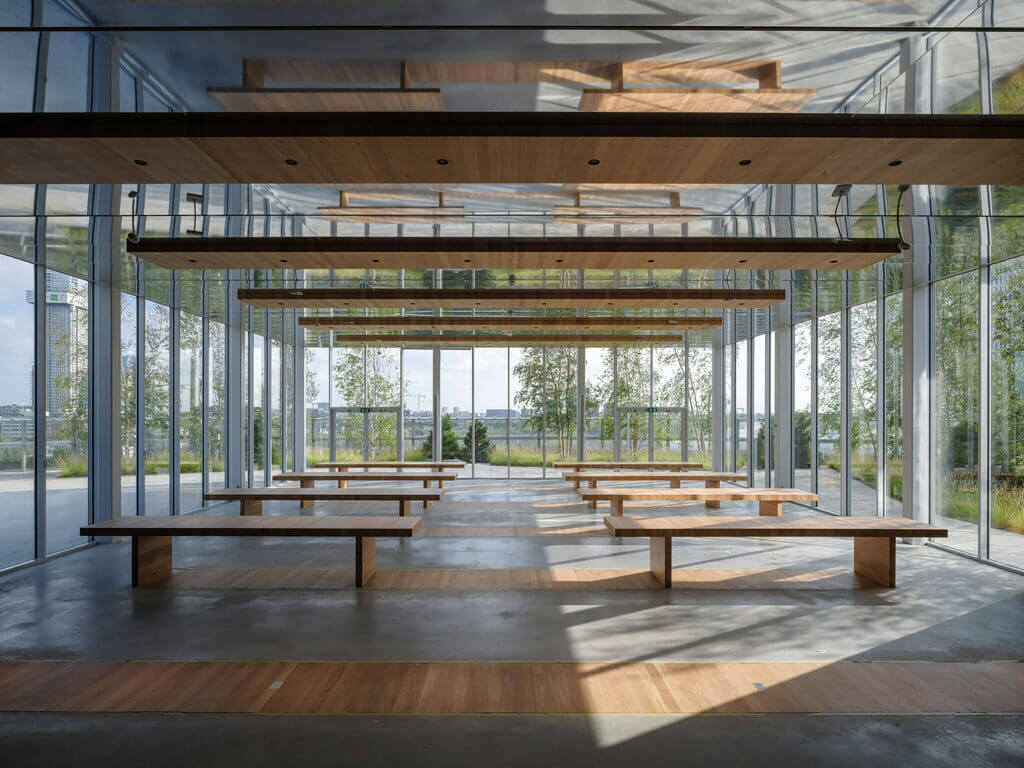 “I think it’s great to see how the depot has been embraced by Rotterdammers even before it opened. The depot is a building that makes many people happy; skaters have their own place outside that will hopefully stay, while passersby try to figure out the best place to stand to take a good selfie,” stated MVRDV’s founding partner, Winy Maas.

She continues, “As an architect, I hope that visitors will soon enjoy the interior, the rooftop forest, and the experience of being in direct contact with the art without the mediation of a curator. Our ambition was to give the museum park a new dimension and to bring different target groups, from schoolchildren to Feyenoord fans, into contact with the boijmans collection in an innovative way. We hope to have added a new work of art to Rotterdam’s already rich architecture collection,”

The depot focuses on the artwork as an item and shows the process from start to finish, including repair, shipping, and the art of packaging.  The depot acquires its own creative style when the backstage is displayed at the front stage. This provides an entirely fresh perspective and encourages the formation of new ties. 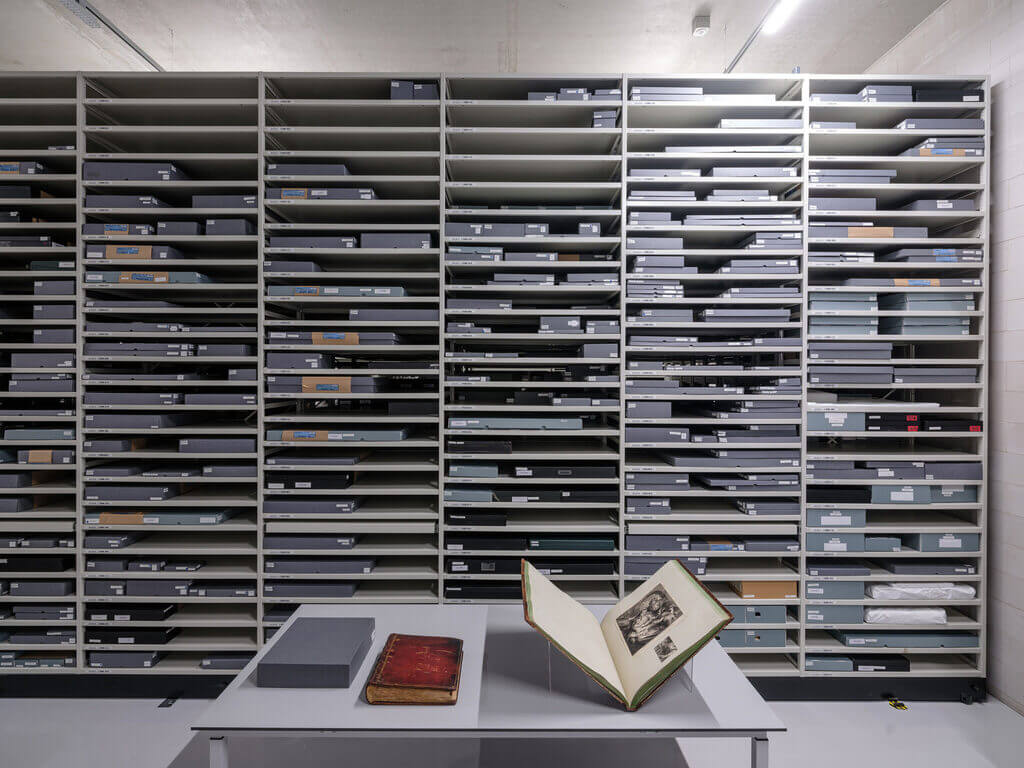 Visitors can go about the structure on their own or with a guide. They may watch the conservation and restoration operations by entering the four restoration galleries with the assistance of a guide. All works have a QR code that can be read using an app, much like the restoration workers would.

This gives tourists the unique sensation of wandering through an art museum. This application provides all the details of the artwork to the viewer. The depot will also keep tourists informed about which art objects are being restored at the ateliers via the website.

The reflecting and curving facade creates views of the park and the cityscape, fusing the skyline with the flora of Rotterdam. The facade is a living tableau, allowing the structure to change appearance depending on the climate and happenings in the surrounding region at different times of the day. The reflecting structure has a total area of 6,609 sq m.

Non-reflective layers were utilized due to reflection limits, particularly in regard to the hospital at the back of the building. The cloud-shaped aspect of the structure is created by placing this foil over the mirror glass layer. 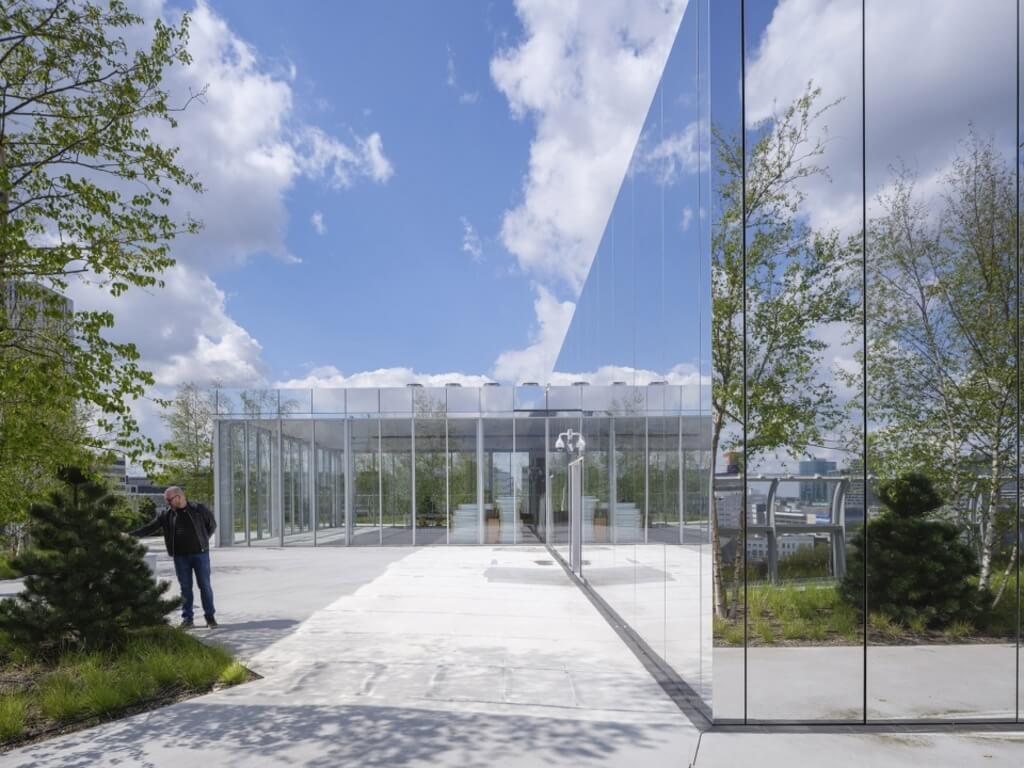 World’s First Fully Accessible Art, MVRDV’s Depot Boijmans Van Beuningen is an iconic addition to the already stunning architecture of Rotterdam. The versatile structure is a place to get lost in the world of art and at the same time, enjoy the architectural design from interiors and exterior. 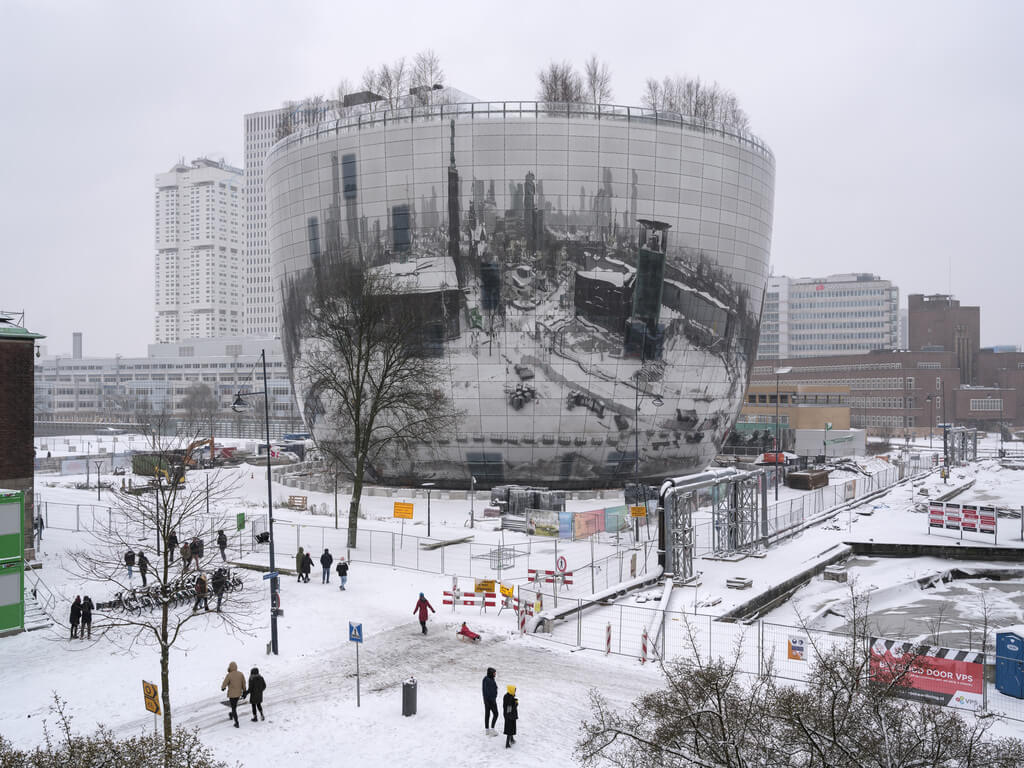 This architectural work is an example of the new design language that demonstrates the caliber a structure holds. The proposed architectural design caters to the needs of the artwork for preservation and offers the transparency of the process to common people. This proposal is an example of sustainable development with a futuristic approach. The inspirational artwork within the depot and engaging reflective surface on the facade act as an element of interest allowing visitors or passersby to gaze at the spectacular views formed.

10 Challenges Facing the Construction Industry and How to Tackle Them

Almaty Cafe and Restaurant by M.serhat Sezgin in Kazakhstan 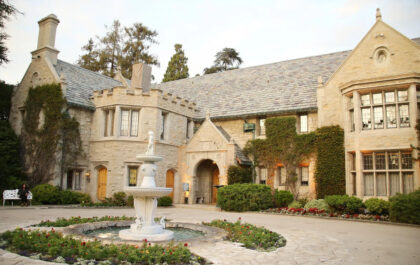 There’s something so enticing about lavish houses that makes each one of us dream of living in one, right? It’s…

Symbiotic Architecture by Manas Bhatia: A Self Growing Tower 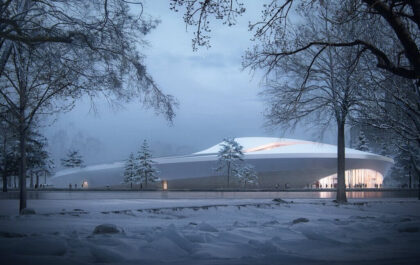