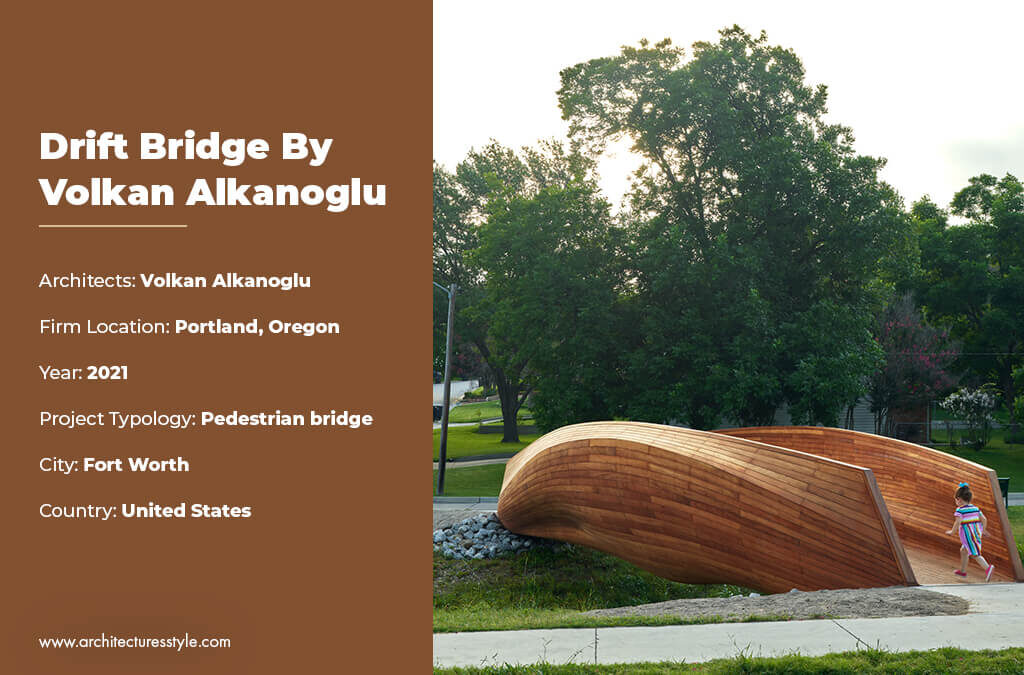 archistyladmin, 1 year ago 8 min read 2437
Table Of Contents hide
1 Project Specifications:-
2 Inspiration for the Drift Bridge
3 Material and Technological Finesse by Volkan Alkanoglu
4 Interior of the Drift Bridge
5 Is “Parametric Design” only a Buzzword? 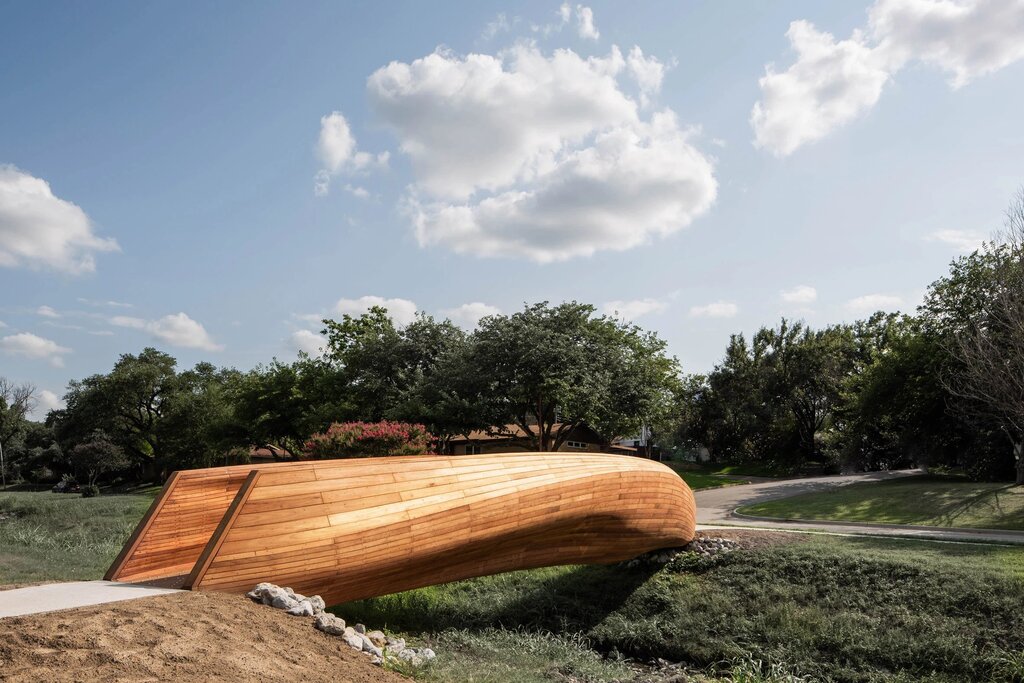 A mystical novel parametric project has been anchored down in the North Texas neighbourhood by designer Volkan Alkanoglue. It is a pedestrian bridge which is also considered as a public artwork titled ‘Drift’. The local artist residing in this neighbourhood has described the bridge as “a bouquet of flowers on the kitchen island”. The bridge is located in the Fort Worth area in the South Hills neighbourhood, it is a part of the Fort Worth Public Art Program.

It is a 62 feet long bridge that spans over a dry creek bed which separates the neighbourhood that is surrounded by modest post-war ranch homes. These 62 feet of a crossover has proven to be a huge help to the neighbourhood to create a human scale connection as previously there was no clear access for over seven blocks to access these two parts.

Volkan Alkanoglu spent a modest budget of $375,000 to build the ‘Drift’ by utilizing parametric and computational design methods. Alkanoglu refers to this bridge as a “plug-and-play” urbanism or the usage of prefabrication methods to create structures effectively that can be directly then installed on-site. Despite being fabricated in Indiana the Drfi was installed in Fort Worth in a matter of a few hours.

Inspiration for the Drift Bridge 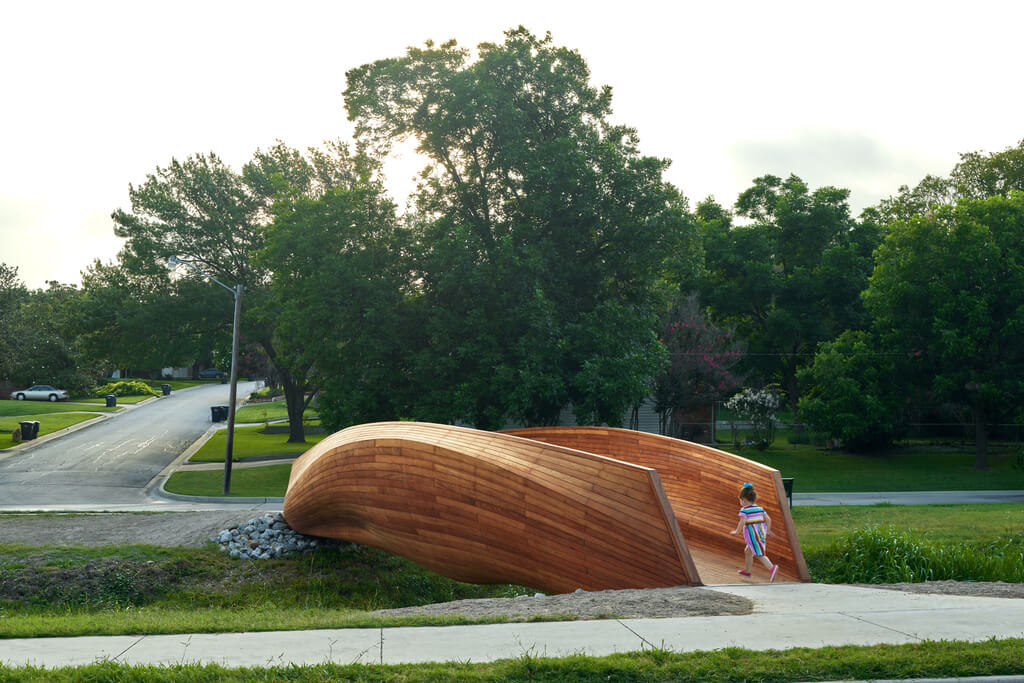 This creation by Volkan Alkanoglu was inspired by two key elements and timelines. By keeping in touch with the prefabrication methods exploring a range of divergent scales the splint design from the mid-century era by the architects as well as designers, Charles and Ray Eames was an inspiration.

Along with this, the intricate construction of shipbuilding was also one of the key inspirations behind the making of the Drift bridge. To take references from shipbuilding, the structure and substructure is a series of contours that create the final form that looks like one continuous wave.

The result looks like a canoe-like hull with a smooth and continuous finished surface. To add more fluidity to it,  timber has been used in the form of slate along with a central rudder along the bottom edge of the middle. 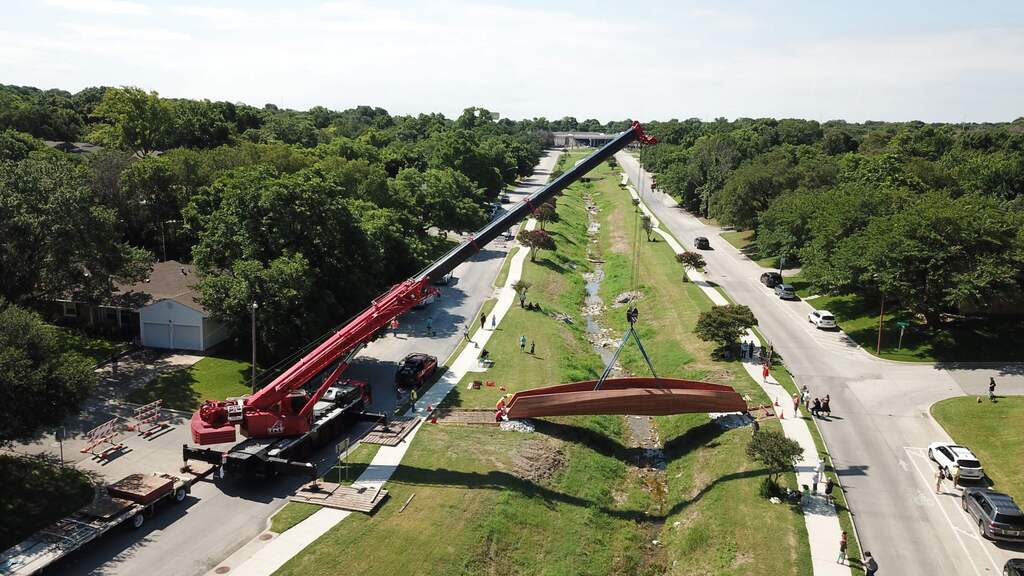 Taking the inspiration from the 20th mid-century era the organic form, clean and sleek design blends with the modern contemporary digital tools. A contrast of two separate eras creates a form that is digitally modern while being traditional in design philosophy.

“We used a series of digital and algorithmic software to design the bridge, including the steel substructure and the timber planks,” says Alkanoglu.

He continues, “Each piece of the bridge is unique and custom fabricated.” 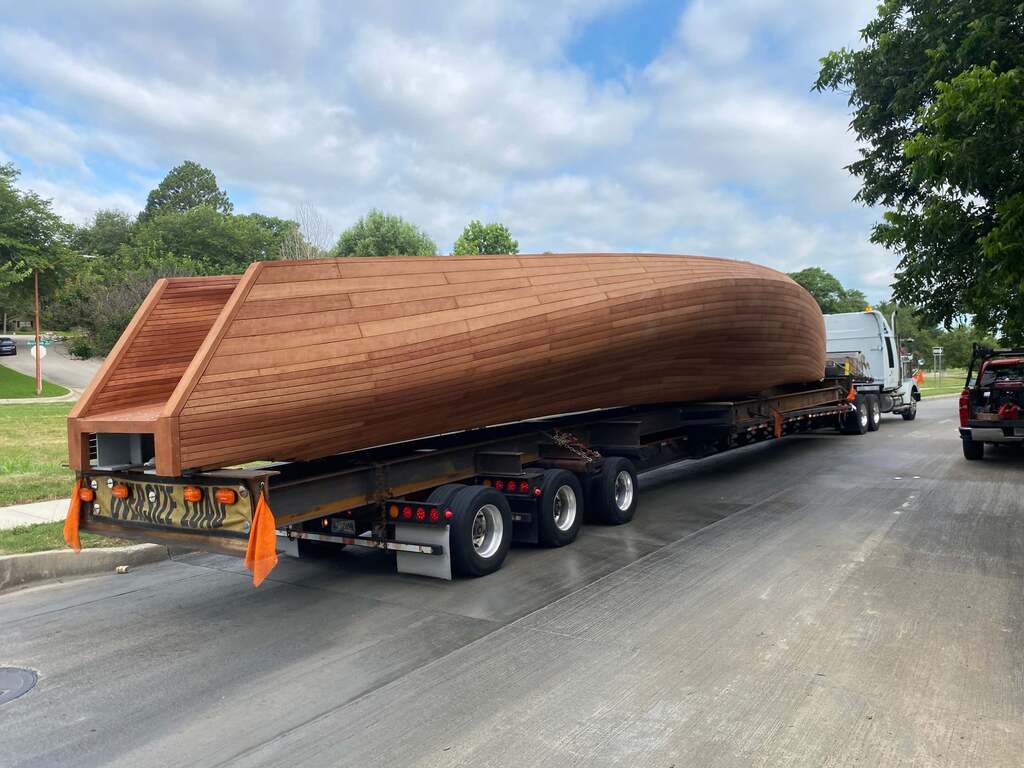 The form of the Drift bridge has a complex vocabulary while staying true to being elegant in design. This design would have rather been impossible in the 1940s mid-century era to achieve even in the Eames moulded plywood experiments.

The form has a double-curvature to it, which in itself is a complexity worth paying attention to. The timber cladding was flip-milled with the help of a CNC machine and a large number of slats on the high curvature zones that were steam-bent. This helps the design achieve large pliability.

The width of these slats varies over the entire surface and graduates throughout the piece exploring in various widths throughout. From the anchor point to the midspan the slats keep on switching their widths to define a curve along the exterior. Towards the end, the curvature again takes a steady form, from its earlier transition towards the interior of the bridge to provide a comfortable surface to walk on. Despite radiating a monolithic expression right from the exterior, the bridge has a constant sense of movement throughout its 60 feet.

Interior of the Drift Bridge 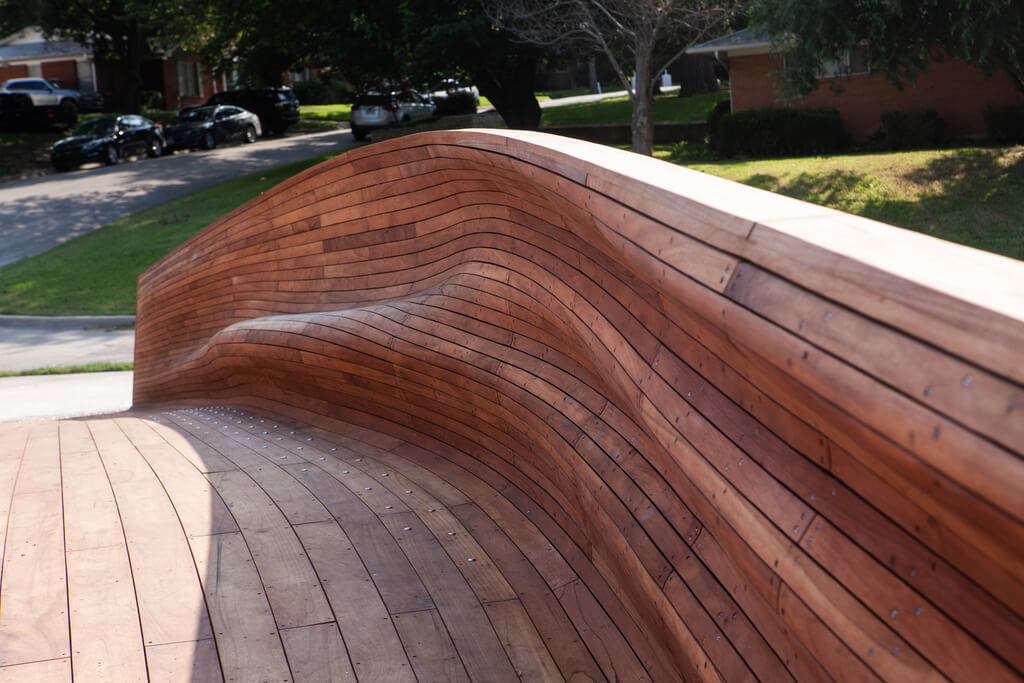 The interior of the bridge is a delight in itself, with the overall curvature form that provides a smooth and elegant surface. The curves remain gradual and tame over the entire span. Even though bridges are looked upon as a connection between two points, the designer Volkan Alkanoglu wanted to create a piece that is a destination in itself.

The undulating form of this Drift bridge creates an interesting geometry where the curves turn into benches and areas of recreation, making this bridge a destination over a connection.

As the surrounding neighbourhood has ample natural green and a colourful landscape, this bridge allows a scenic view of both sides. Offering several perspectives of a greenway and a space for neighbours to interact, this bridge is a well-thought urban intervention for Fort Worth. 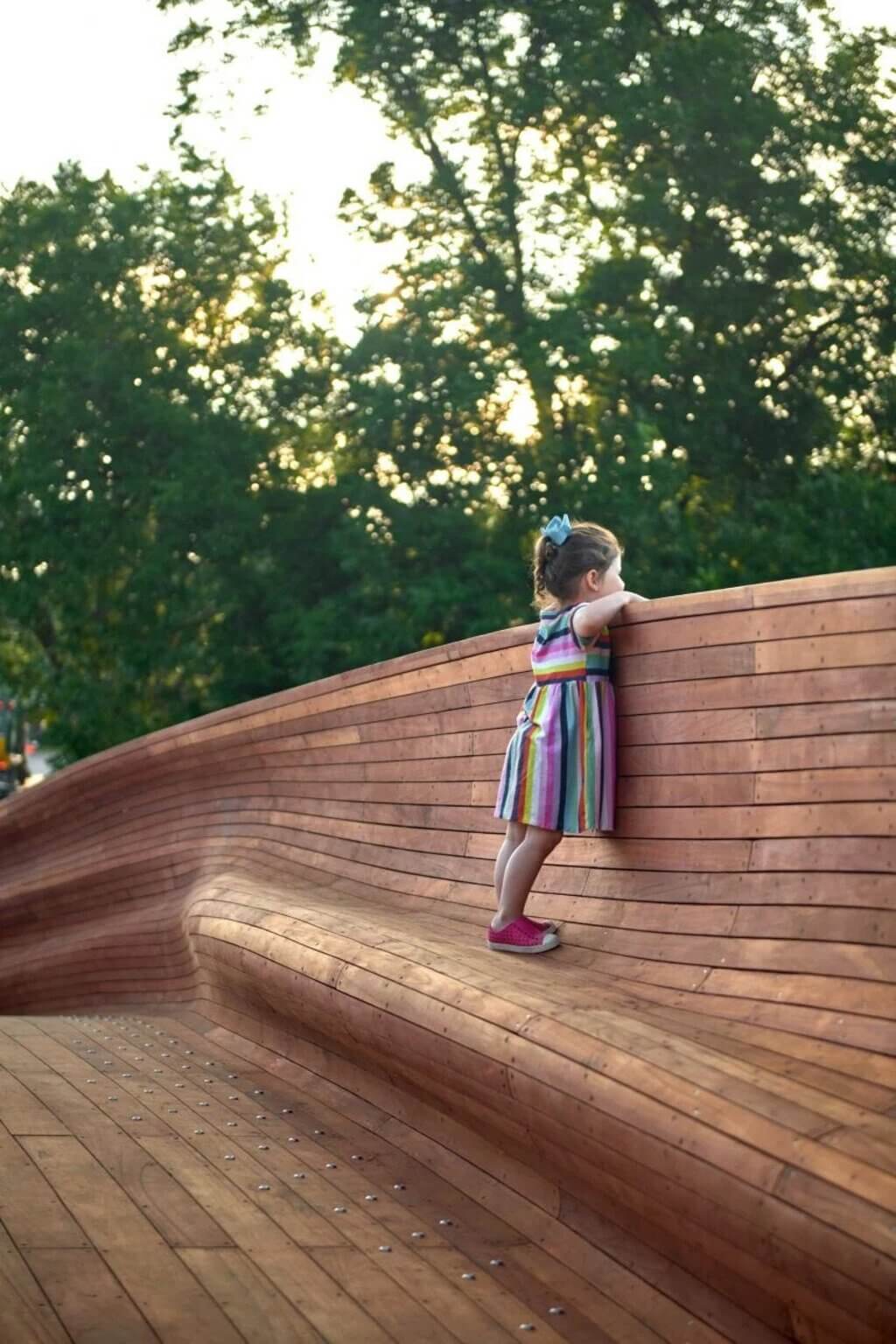 The evenings create a buzz around this bridge, where the benches and a crossover gives the surrounding neighbourhood space for respite.

This was funnelled by the alluring aesthetic quality of the bridge which was treated as a crucial part of the design process. Although, appearance was far from being the only consideration for the computational based design. Considering the iteration process with the sizes, volume, cost, structural finesse and material specifications, the making of this bridge was not an easy job.

“We also had to consider the size of the truck and weight limits since this bridge were fabricated off-site in Indiana and delivered by truck to Texas.”, says Volkan Alkanoglu on the transportation limitations for the pre-fabricated Drift Bridge.

Is “Parametric Design” only a Buzzword?

While many dismiss the “parametric design” as a new age term, Alkanoglu still believes that for works like Drift this technology has proven to be vital.

“Our digital design process allows us not just to connect the dots but to create a feedback loop to adjust to insights [and] parameters while rapidly iterating and testing ideas.“ says Volkan Alkanoglu.

He continues, “There is a paradigm shift where the role of the designer changes from the single author creating one proposal to being more of an editor or curator who can select and choose from a series of options.” 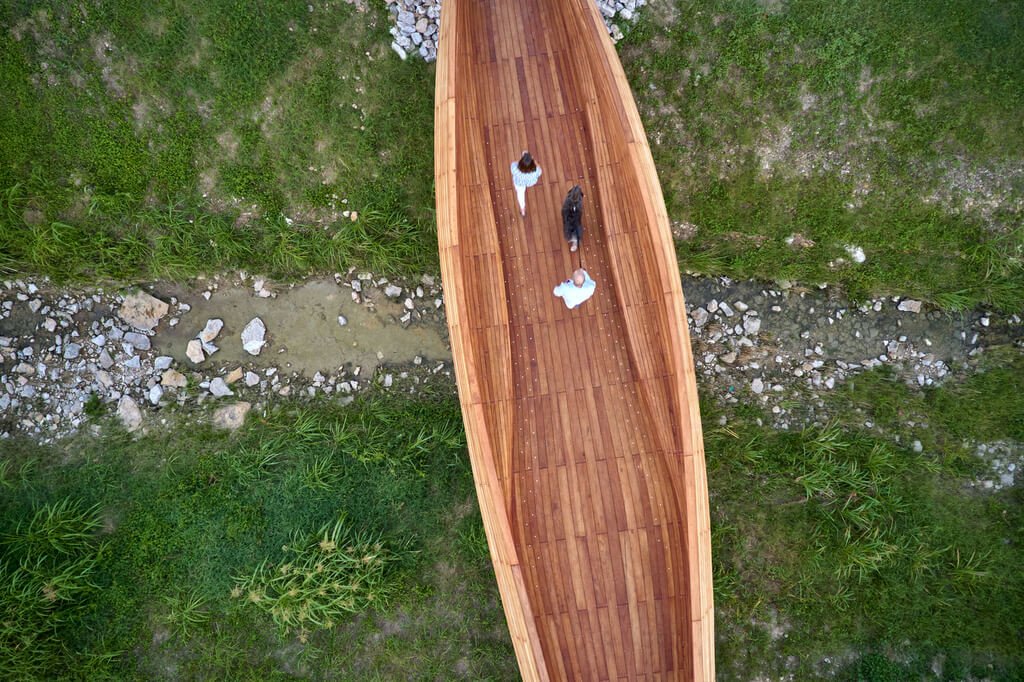 Volkan firmly believes that parametric architecture can create new avenues through automation, technology and computation. He believes that this way it can provide more ground for art and architecture to thrive by taking a sustainable route as well.

Since Drift was commissioned by the Fort Worth Public Art Program it was necessary for it to be a blend of art and architecture. Therefore, it had to be a disciple of fluidity which was achieved through the freeform way of creating architecture. And to make that happen, parametric architecture came to the rescue. With prefabrication and construction technology it provided a new solution to cater for the infrastructure and urbanism.

Parametric design has reduced labour by a considerable amount and therefore, reduced material costs as well. Through the Drift bridge, it creates the possibility that prefabrication can be done on an industrial scale.

In the United States the minute contractors utter the word “improvements”, it is usually viewed as a huge liability that is meant to cost inconvenience on an infrastructural level. But with this concept of ‘Plug-and play’ urbanism, we can change that to create a state-of-art architecture that uses technology at its core. Pre-fabrication, automation and computation allow the structure to be built off-site and later installed with ease. 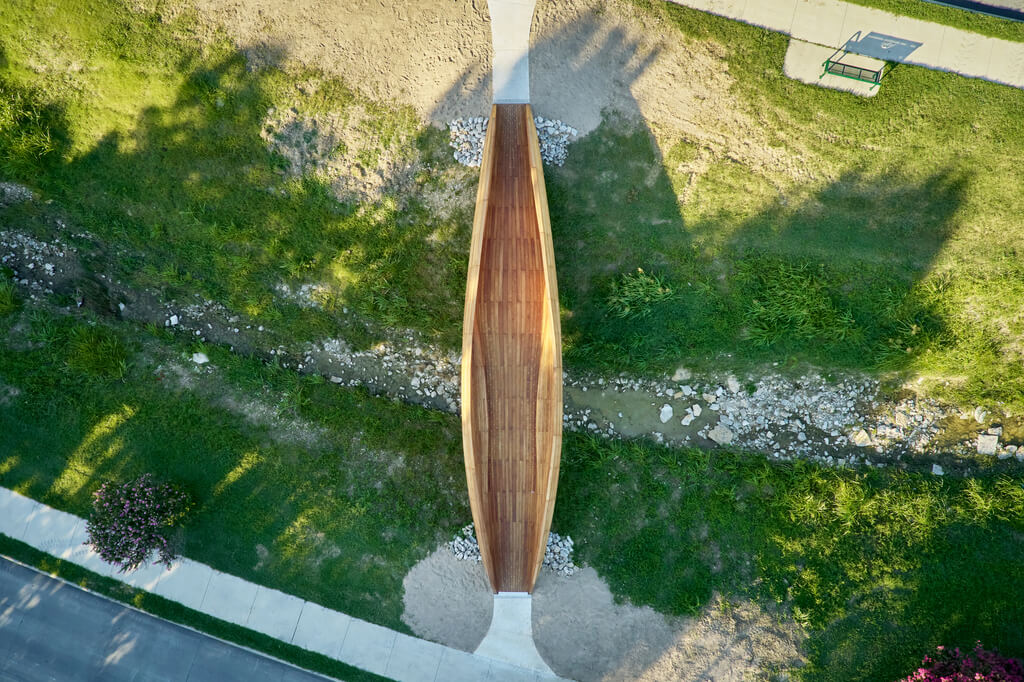 Being called a ‘program piece of art’, this project remains an art piece that acts as an urban intervention. Alkanoglu also emphasized that during the construction the residents and the entire community were equally involved throughout the process. Even the presentation of the initial design for the bridge saw a gathering of a hundred residents in a local church. 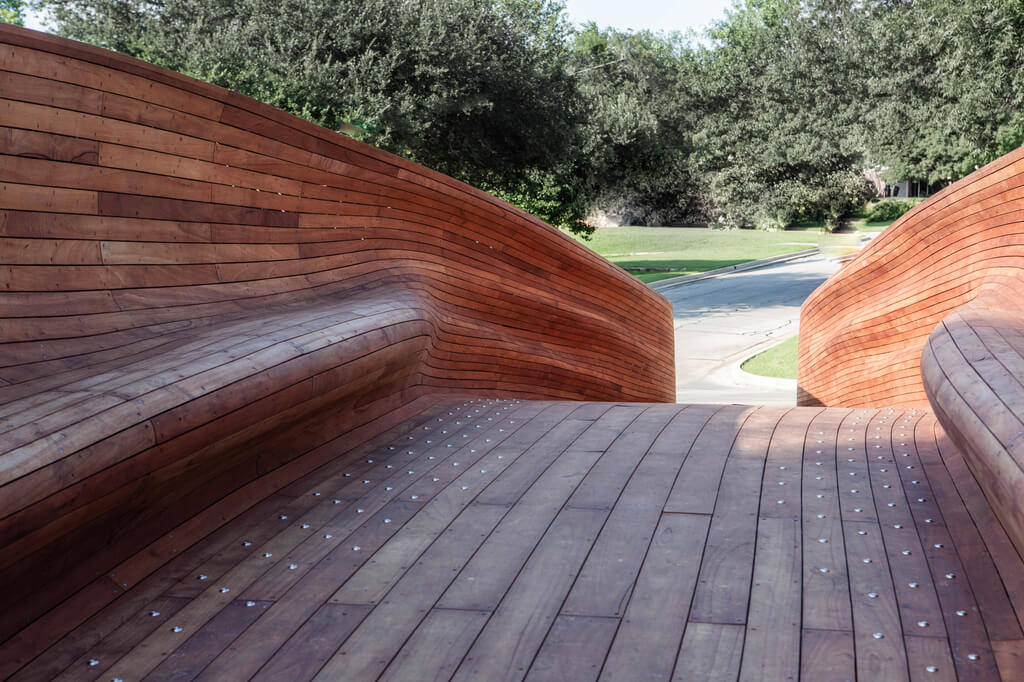 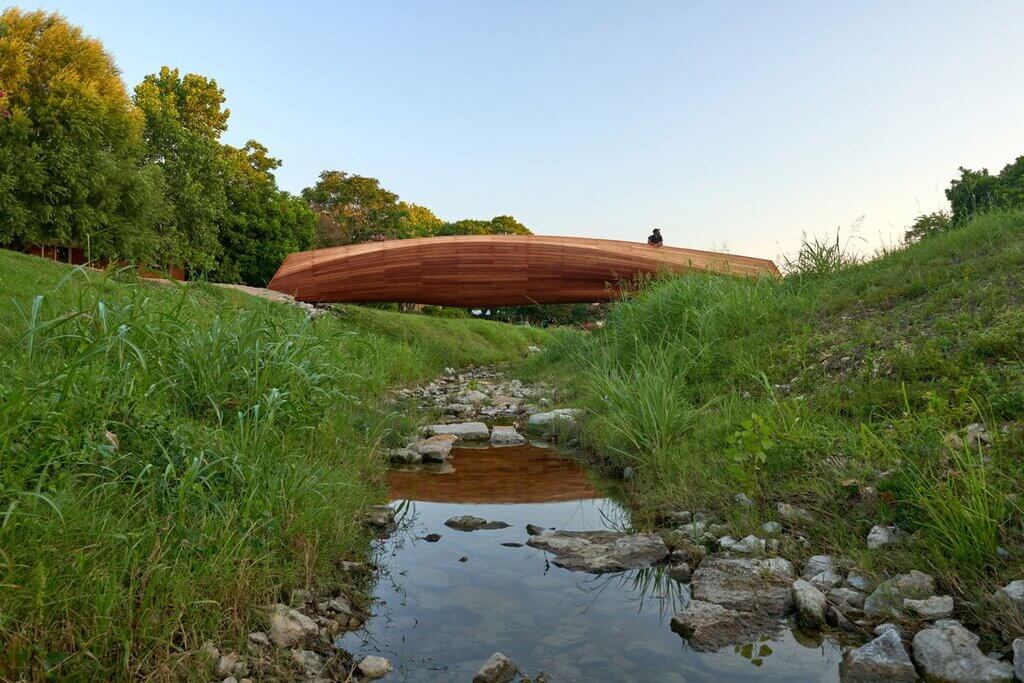 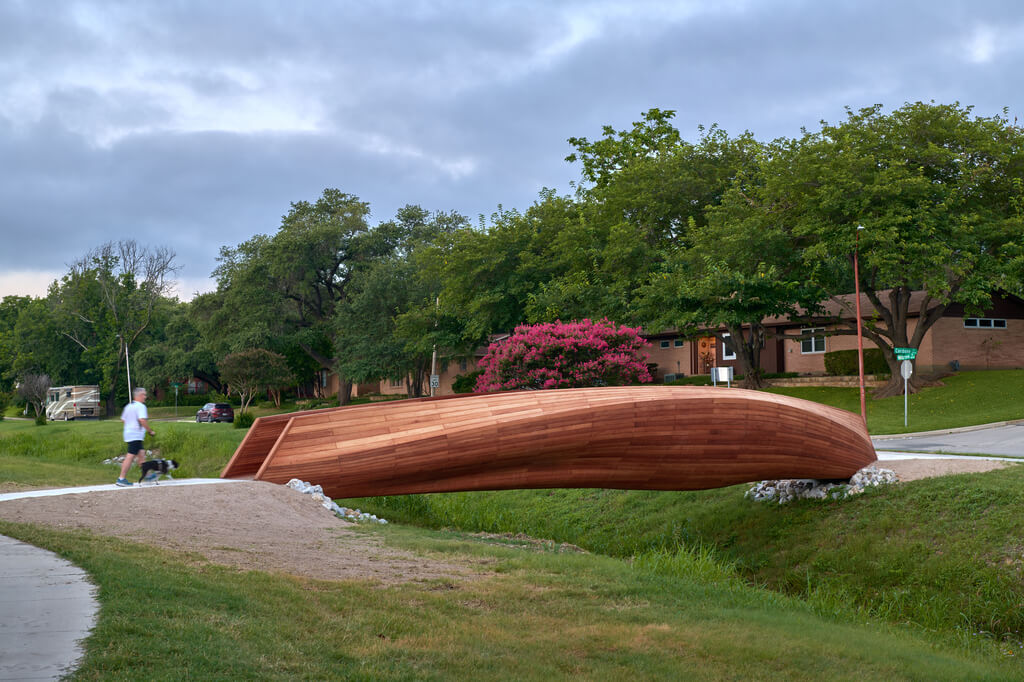 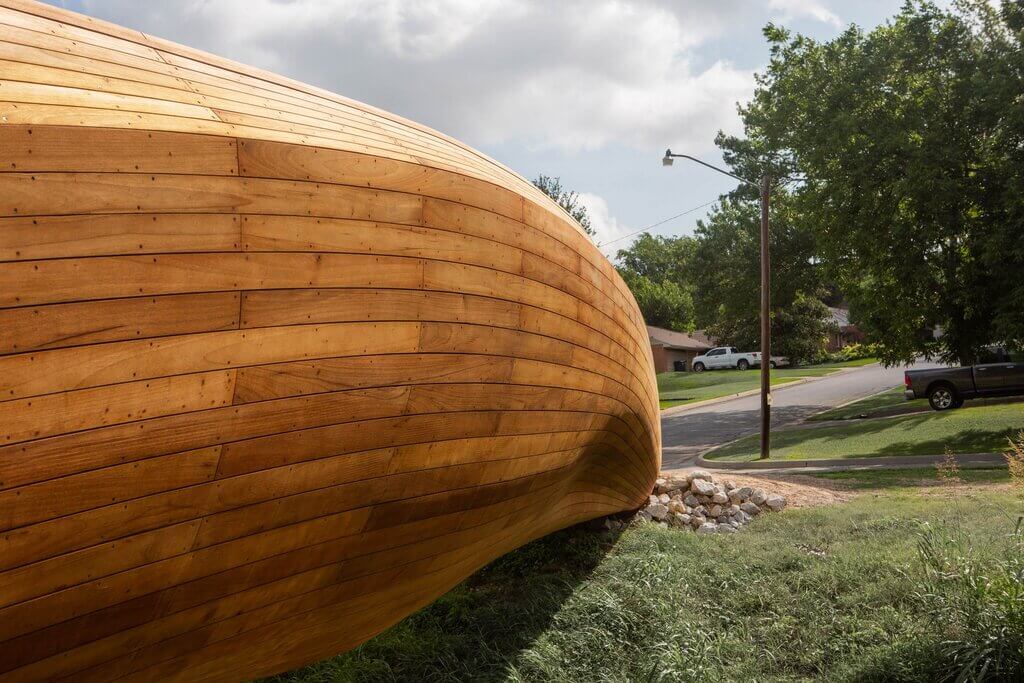 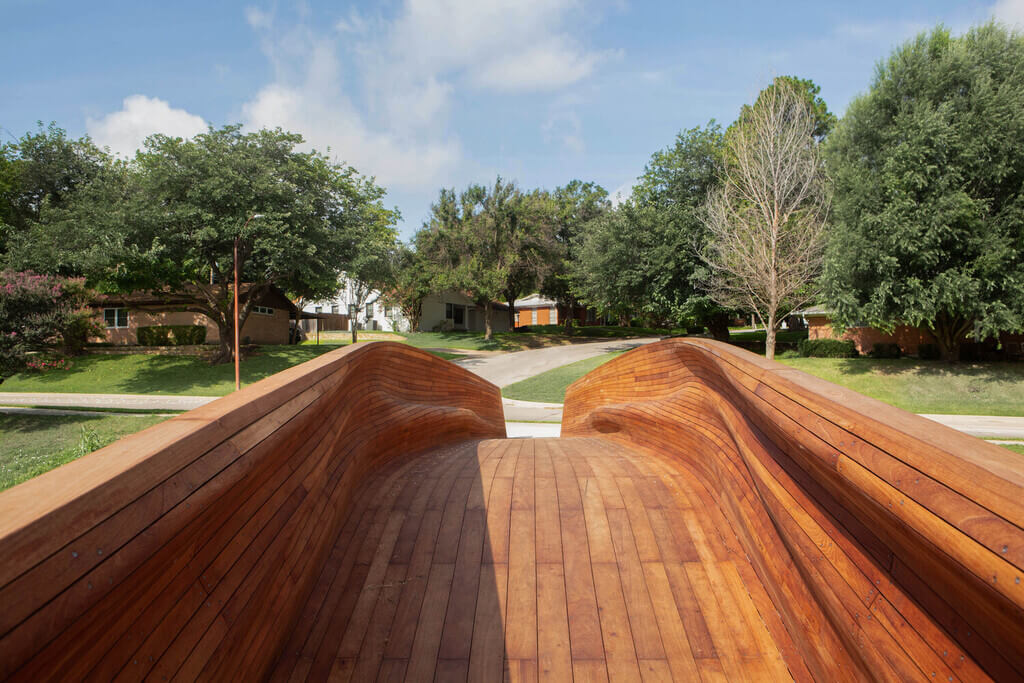 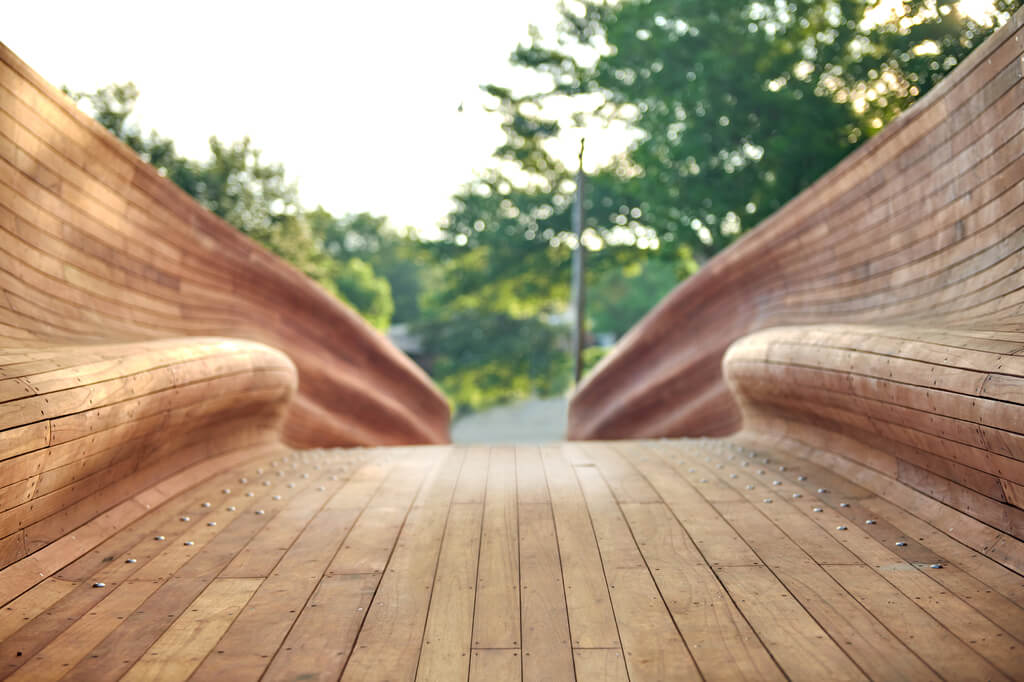 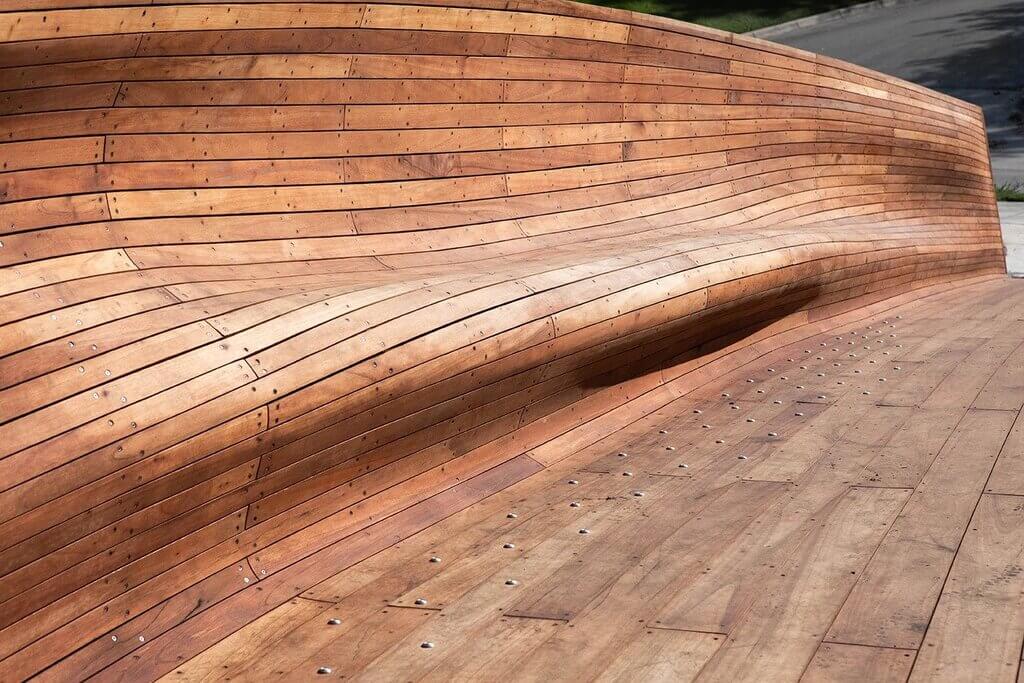 Alkanoglu added, “The design team was “able to answer many questions and received a lot of appreciation.”

He continues, “We continue to get a lot of exciting positive responses from the local community now that the bridge is finally in place.”

The site was once considered a ditch and is now being seen as an active green space due to the Drift bridge. It helps in connecting the community, literally!

While art might look enchanting in a trapped building to come by and observe, however through Drift bridge, the community takes art outside, open, visible and commutable to form a meaningful public space by bridging the gaps in the community.

Popular Different Types Of Houses In 2023 (with Pictures)

U38 House by OfficeAT: A Brilliant Example of Steel House

One Story Floor Plans: Choose The Right Plan For Your House 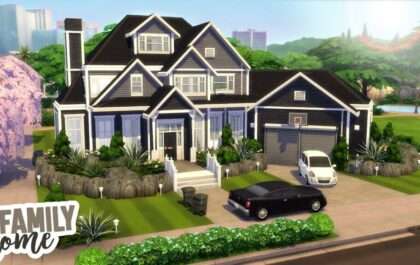 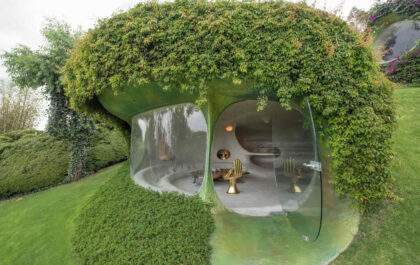 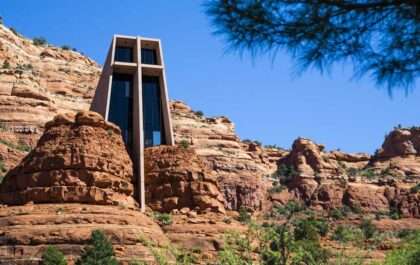 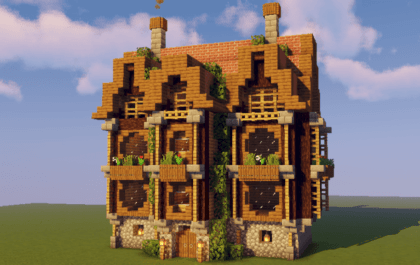 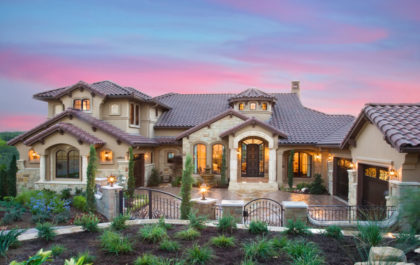 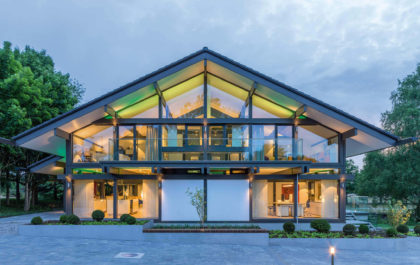